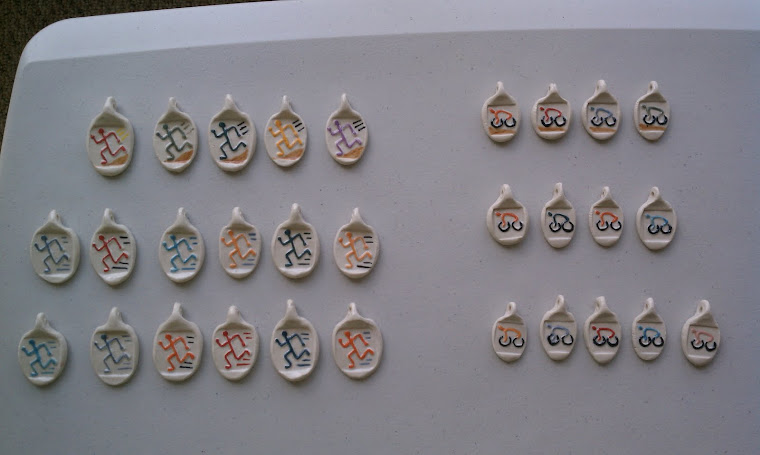 Leadville Trail 100 Race Report:  August 21-22, 2010
Ok, so I almost never write up race reports so this ought to be brief!
We (Laura, my partner of 10 years, Mom-Rosemary, and I) arrived in Denver on Tuesday afternoon, August 17.  My friend, Melanie, picked us up and as soon as we get to her house in the mile-high city, I am determined to go for a run as I ran only 2 short runs while up in Canada the last 10 days because I was too busy with getting ready for the Art Show that my mom and I were in on the weekend of Aug. 14-15.
While on the run around “Wash Park,” my pacer-to-be, Jon Aardal calls and we firm up plans to meet in Leadville on Friday.  My buddy, Don, who had run a race in Colorado a few weeks earlier, met Jon at the race and found out that Jon wanted to pace someone at Leadville.  I was MORE than happy to take Jon up on that offer as I had been trying to see if anyone in Leadville wanted to pace coz I was “scared to death” to run this race with the asthma troubles that I’ve been having all year.
High elevation is known to trigger asthma symptoms and my asthma doc had told me months ago that I should take steroid pills for a few days leading up to the race to fight the inflammation in my lungs that was sure to arise due to the elevation.  For those who don’t know…the entire Leadville race is at high elevation…like 9,600 to 12,600 feet.
I did not listen to my asthma doc…did not get the steroids…and instead just took all my homeopathic remedies from my homeopathic doctor.  I wanted a pacer so that if I were to have any trouble at the high elevation, coupled with the cold air at night, I would have someone with me to help me and I would also have a second set of eyes with me to avoid getting lost.
OK…I can now see that this report is gonna be long!  Sorry!
On Wednesday, we drove up to Mt. Evans, which is at 14,130 feet of elevation and stayed for 4 hours.  ICK!  Even though we drank plenty and had electrolytes, we all had headaches.  My friend, Melanie, drove us up there and I did the drive back down.  While up on the mountain, we had the great fortune of being visited by a herd of mountain goats.  It was so cool.  We also saw elk and deer on the way up in the dark. 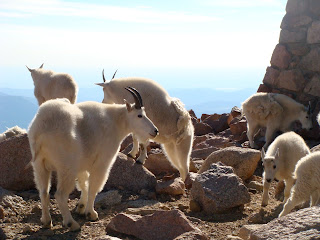 On Thursday, we headed up to Leadville.  Had some car troubles, but then rented a car (suv) and got up to Leadville for the tail end of packet pick-up.  Then it was time to head to the liquor store and get some beer for Mom and I.  YUM!  Was it ever good!
Friday had us hunting down the Organic Coffee shop, going to Medical Check-In, and cruising up and down this neat, little, quaint, unique town of Leadville to do some shopping.  Ran into my buddy, Barefoot Ted and we took several photos together. 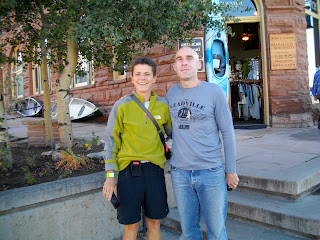 At 10am (or was it 11?) we had the race briefing and I also got to meet Jon in person along with his lovely wife, Kimberly.  We chatted in depth about what I wanted out of a pacer while Mom and Laura (my crew extraordinaire) were in the Crewing Briefing. 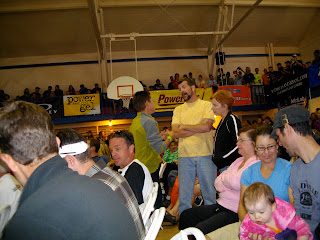 After the briefings, it was time to pack up drop bags…BUT, I realized that I didn’t have enough gels for my drop bags and since I can only have the Raspberry gels (food tests a couple months ago revealed that I can no longer have lemon, lime, chocolate, orange, apple, cinnamon and various other things so it limits my gel flavors).  So, we went and got more gels, packed up my drop bags and them took them down the street to the drop bag drop location.
After that, Mom and I visited a local pottery shop and bought a couple things…feeling very good to support a couple of the local starving artists.  We potters love to support each other.
While there, we got a call from our friend, Jen, who would be crewing and pacing my buddy Brian (Kuhn).  We decided to hook up for dinner with them and Mike Siltman, a fellow Illinoisan who was going to be attempting Leadville for a 4th time after having been unsuccessful in his 3 previous tries.  You have no idea how Mike’s unsuccessful attempts scared me, as Mike is one hell of a tough runner and to think that he couldn’t complete this had me very scared.  This along with my asthma and the high elevation and the short time of only 30 hours in which we had to complete this run.
Dinner was a blast as we all shared old race stories over our mandatory pre-race beers.  After dinner, we headed to an ice cream shop, but Mike and I were watching our “girlish figures,” so we did have any! 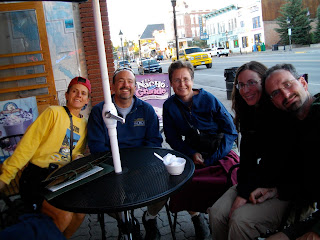 Soon we were all off to get some sleep, as the race would be starting at 4am so that meant that I’d be getting up sometime after 2am!
Didn’t sleep well, as usual, but soon I was out the door after a cup of coffee and an “anti-inflammatory” shake.
It was cold out, but Mom and Laura huddled close to me to help keep me warm.  We took some pictures that I tried to smile for, but really I was nervous and scared and just wanted to get going…to get over the nerves. 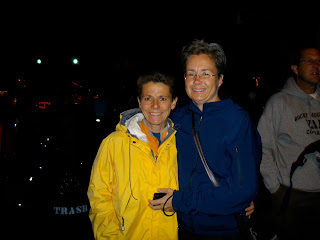 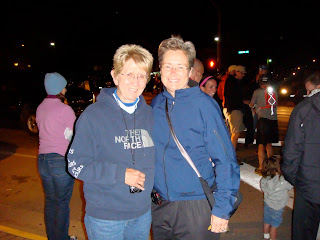 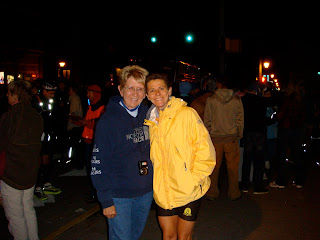 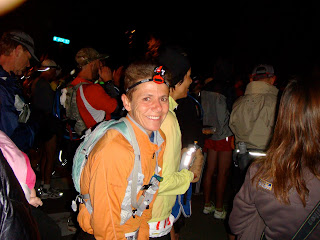 I felt fantastic as I sailed into Twin Lakes and was really optimistic about finishing now.  After all, I would now have my pacer, Jon, with me and we had 13+ hours to do the last 30 miles!  Yep, that right…I had miscalculated and would continue to wrongly believe that I was at mile 70 at Twin Lakes until I was nearly at the next aid station when Jon would say…"Well, I believe we are about at 65 miles…” and then it would hit me…@#$%^&!  It was 60 miles back at Twin Lakes and NOT 70!!!  OMG!  How am I gonna get 40 miles in in 13 hours at this rate?????
Well, we kept plugging away and I kept thinking I’d not make it to the finish in time.  I expressed this to my crew at each aid station and when we were back at Fish Hatchery with ~23 miles to go, I had a bad asthma coughing attack so it took quite a while to get out of there.  Once I did, I warmed up and kept moving steadily even though I found it impossible to run anything that wasn’t at least flat and free of rocks.  I just didn’t have it in me to dance around rocks and my feet were getting so sore—mostly on top where the laces had been digging in.
Jon was so patient with me and was so good at staying just enough in front to keep “pulling me along” and enticing me to jog whenever I could.  We had some nice conversations, but at times, I was so tired—and once even falling asleep on my feet—that I could barely grunt back responses to him and when I couldn’t hear what he was saying, I’d spout off, “I CAN”T HEAR you!”  Thankfully he was understanding and patient.  Not sure how he knew exactly what to do on his first ever (VIRGIN) pacing assignment, but he was a real gem.
It was so good to get into the final aid station at May Queen and see some daylight, but knowing we still had 13.5 miles to the finish seemed nearly impossible and it seemed that my pace was so slow that I still couldn’t see how I could manage this distance in the final 5 hours or whatever it was that we had left.  I knew that the last 5 miles would all be a slight uphill and that I would be too tired to run any of it.
I told Jon that I could run only flats and downhills that were relatively free of rocks so he moved accordingly and we did just that.  Whenever I would see him jogging, I knew that I could jog and off we’d go until I said, “walking,” or “I need a small walk break,” or something to that effect.
To my surprise, we ran quite a bit and even on the final 5 miles we did several segments of running.
To my surprise and enjoyment, my good buddy, Brian from back home in Champaign once again caught up to me (we went back and forth throughout the entire race) as we were approximately 2 miles from the finish and we walked and ran the last 2 miles together and crossed the finish line together holding hands and smiling the biggest smile that I’d been able to muster in the last 2 months!  This was a huge contrast from the crying that I thought I’d be doing if I were able to finish.  In fact, I would have cried if I’d been alone, but something about conquering this beast with Brian and Jon and then Jen and Laura now at our sides, along with my Mom and Melanie snapping pictures from the sides, made this a most happy occasion! 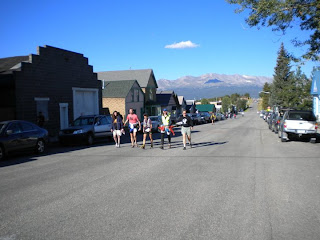 I never felt like I couldn’t complete this race, as tough as it was and it WAS tough, it’s just that I didn’t think I could do it in 30 hours.  Thoughts of my Mom there from Canada, Melanie there from CO, Laura, my partner there for the first time in a while (she has a real job and can’t always come to my S&M contests!) as well as Jen and Brian and Mike, and all the other folks I ran into along the way, made me more determined to “get ‘er done!”  Plus, I just knew if I finished, I wouldn’t feel obligated to come back again to conquer this beast…much to my crew’s relief.  They had already sworn this race (and possibly any others) off, proclaiming that they were getting too old to pull all-nighters like this!
Not too long after Brian and I finished and got out showers, sure enough, our buddy Mike was heading to the finish for his first ever successful finish here!  We were all so excited.  Mom caught him with her camera and then Laura loaned him her phone so he could call his wife with the good news.  She was ecstatic, he said!  Life was good! 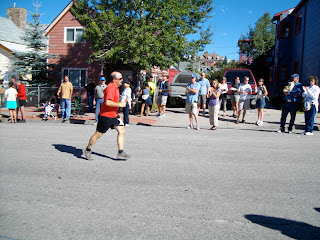 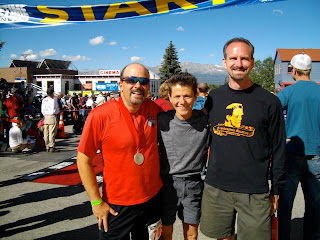 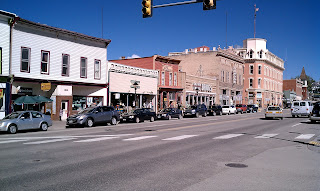 Leadville, the town, is an awesome place.  I encourage you all to go.  Not sure how the race will change as it is now owned by a for-profit company, Lifetime Fitness.  There were too many entrants this year and more trash than I have EVER seen on a trail course.  It was disgusting!  I feel very lucky to have done this race before it totally turns into a commercialized adventure and I will treasure for a lifetime this adventure that I had with the friends and family that I love so much.  Thanks so much for babysitting and encouraging me!  YOU made the difference.  YOU were the best part of the race!!!  YOU truly were!

P.S.  For those who care, this is what I consumed during the race:  Clip2 sport drink during the day, Amino at night.  1-1/2 anti-inflamatory shakes (medical food).  25 gels, s!caps-1/hr during the day, less at night.  2 cups of coffee at 2 of the nighttime aid stations, 2 caffeine pills when I was falling asleep running/walking. 2 bites of potato with salt at mile 23 and one very small piece of watermelon at mile 40.  One small glass of coke in the afternoon.  Water at aid stations.
Posted by Tracy Thomas at 12:32 PM 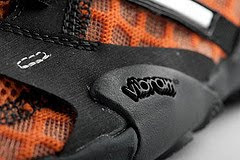 Wish These were Released NOW--in time for ATY race!